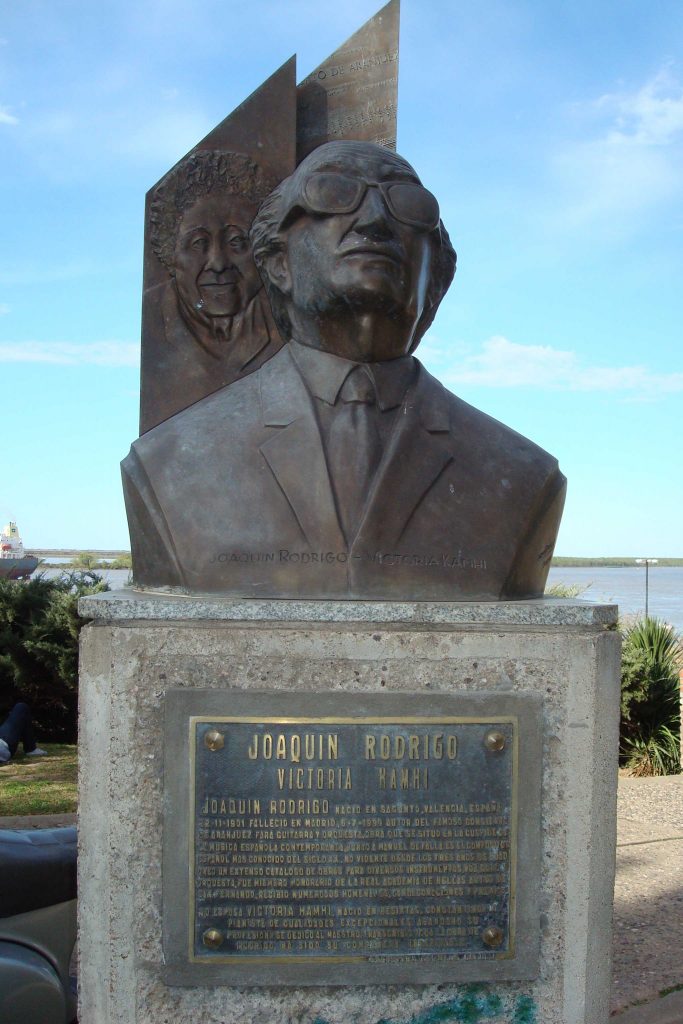 Look at those dates! So many of classical music’s great geniuses led tragically short lives—Mozart, Schubert, Mendelssohn and Bizet all died in their thirties—that when we encounter those blessed with longevity, we rejoice. The Spanish composer

Joaquín Rodrigo, though blinded by diphtheria at age 3, lived to be 98. He credited the apparent calamity of his illness for his lifelong involvement in music.

Rodrigo made rapid progress at the conservatory in Valencia, graduating early and going on to Paris, where he studied with Paul Dukas at the École Normale de Musique. But while he absorbed the elements of French style and refinement, his music remains Spanish to its very core. With Manuel de Falla (b. 1876) and Enrique Granados (b. 1867), Rodrigo was central to the flowering of musical creativity that raised the prominence of Spanish music in the 20th century. These composers burst upon the music world like a new discovery, though their cultural lineage extended back centuries. Musicians and audiences greeted them like long-lost brothers, but their distinctively Iberian sound, drenched in folk melodies and in the traditions of

Spanish church music of the Baroque period, was like nothing to be heard in the rest of Europe.

While Manuel de Falla gained renown for ballet scores that traveled with Serge Diaghilev’s Ballets Russes, and Granados’ orchestral and piano compositions earned their standing as repertory staples (and his opera Goyescas in opera houses including the Metropolitan), Rodrigo became known for his remarkable concertos. They reflect the Spanish affinity for the guitar; the two best-known examples, his Fantasy for a Nobleman and the Concierto de Aranjuéz, are both for that instrument. But there are other notable examples, including a spectacularly original concerto for harp. Rodrigo composed the Fantasia para un Gentilhombre, or Fantasy for a Nobleman, in 1954 for Andrés Segovia. Though it is often mistakenly associated with Moliere’s Le Bourgeois gentilhomme, the nobleman of the title is actually Segovia himself.

The musicologist and commentator George Jellinek, who was not inclined to exaggerate, called Rodrigo’s concertos revolutionary and said that their freshness resulted from Rodrigo’s use of the second interval. Even listeners with no musical background are likely to have heard about other harmonic intervals—thirds, fourths, fifths, and so on—but seconds, comprised of two notes that lie next to each other on the piano keyboard, are rarely mentioned. And we do hear them frequently in the Fantasy for a Nobleman. But are they so fully responsible for the concerto’s distinctive sound? Or do they function more like the rainfall on a Paris streetscape, adding a poetic dimension to a scene that is already beautiful?

The concerto is comprised of three movements developed from traditional Spanish dance forms, starting with the 17th-century villano introduced in the violins. This opens onto the ricercare, a fugal section. In the second movement we hear the stately dance rhythm of the españoleta composed, according to the movement’s title, as a Fanfare de la caballeria de Napoles (Fanfare for the cavalry of Naples), which was formerly under Spanish rule. This is followed by Danza de las hachas, a “hatchet dance,” traditionally performed with torches (as in the Ritual Fire Dance from de Falla’s El Amor Brujo). The concerto ends with a brilliant canario, a folk dance from the Canary Islands that builds in dramatic intensity, culminating in a dazzling cadenza for the guitar.