What’s your all-time favorite Broadway soundtrack to listen to?

Wow, that’s hard! I have many for different reasons. So I’m going to cheat on this question and give you my top three and why. First is ‘Gypsy’ because I think the score and the book are equally perfect. It could stand as either a musical or a play and still have great depth, and of course, it starred the great Ethel Merman, who is a Broadway titan. Second is ‘Annie,’ which has great emotional meaning in my life, and I will elaborate on that in the next question! And third would be ‘Dreamgirls,’ because I can be in the worst mood ever and all I have to do is put it on, and it makes my heart happy!!!

What first inspired you to become a theater actor?

Oh, that’s an easy question. When I was 12 years old, my mom and dad took me to see the original production of ‘Annie’ on Broadway. The little girl that was playing Annie was Andrea McArdle, who is also from Philadelphia so we went to support the “local” girl. As the story goes, from the first downbeat of the overture, I sat on the edge of my seat and never moved a muscle until the end of act one. And by the end of act two, I no longer wanted to be a veterinarian! My life would never be the same again after that magical experience! 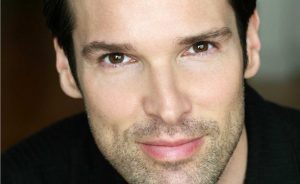 What was your favorite role to perform on stage?

Oh my gosh, I’ve loved all of them for different reasons, but the one that does come to mind is playing Jesus in ‘Jesus Christ Superstar!’ It was one of my first equity jobs, and I was WAY too young for the role at the time, but it was one of the most beautiful experiences I can remember in my entire career. And let’s be real, playing God is pretty cool, right!!!

Are you a fan of any movie adaptations of Broadway musicals?

Yes without question, ‘Chicago’ I think is the most amazing adaptation ever. Rob Marshall is amazeballs! ‘Chicago’ was my very first equity job, so it has a very special place in my heart, and very often the movie adaptations of Broadway musicals are a disaster! ‘Chicago’ was divine!!!

Which Broadway musical do you dream of starring in?

I’ve been really lucky with the rolls I’ve gotten to play on Broadway. But I did a concert version of ‘The Music Man’ with Kelli O’Hara and Shirley Jones and ever since I’ve been dying to play Harold Hill!

Would you ever reprise your role as the Phantom?

Of course! If they ask me! Phantom has been such a huge part of my life, and every time I’ve gotten to revisit the role, I’ve been able to bring more life experience to it so I think I’d be game! Besides that, I adore Hal Prince, and the Majestic theater is like my home away from home! Phantom is part of my family.

What are you most passionate about in life?

Animals!!!! As I mentioned earlier, I really did want to be a veterinarian when I was little. I have ALWAYS felt a huge connection to animals, -dogs, cats, monkeys, turtles; you name it!!!! I believe I am the best version of myself when I’m surrounded by animals. My precious labradoodle Soot passed away over 2 1/2 years ago, and I am still a wreck so in hindsight, maybe it’s better that I didn’t become a vet.