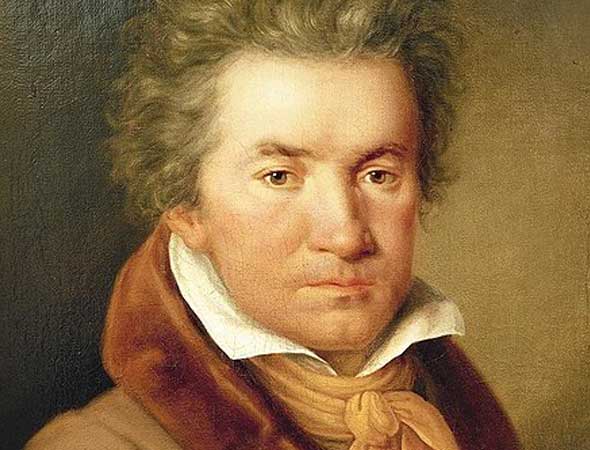 Portrait of Ludwig van Beethoven in 1815 by Willibrord Joseph Mähler

Beethoven’s two romances for violin are the closest of siblings: No. 2 is in F Major, while No. 1 is in G Major. Both were dedicated to the same violin virtuoso, Ignaz Schuppanzigh. No. 2 was published in 1805, two years after No. 1 (although it had been composed in 1798). Musically, No. 2 shares the stately pace and singing quality of No. 1, as well as its rondo structure, which allows Beethoven to repeat the theme with additional material at each iteration. Some listeners hear the melancholy of lost love in this romance’s languorous melody, while others hear a more philosophical musing, poetic and contemplative.

Sure, they sound romantic. But why are they called romances? Toward the end of the Classical period, the term “romance” emerged as a catch-all term for certain works, but especially works like Beethoven’s two romances for violin: relatively short, but long enough to make a serious statement—longer than the typical art song or concert aria. They also usually share a cantabile quality we associate with romance—a smooth, flowing line (cantabile means singable). In addition, a bit of virtuosic display on a solo instrument can’t hurt. In fact, Beethoven’s designation of “adagio cantabile” is as close as he comes to a specific indication of tempo for this work.

Composed for violin and orchestra, Beethoven’s Romance No. 2 combines stateliness and sentiment in equal measure, though this balance can be affected by the tempo chosen for performance. Historically, violinists and conductors have exercised more freedom of choice than with the concerto or the sonatas in choosing tempos for the romances—anywhere from an andante, or walking pace, to something much slower and more ardent. Both romances are built around melodies that return, taking the rondo form that Beethoven also chose for the third movement of his piano concertos. And as in the concertos, each repetition of the theme adds meaning.

Tags
Beethoven| Op. 50| Romance No. 2 in F for Violin and Orchestra|